It has been more than a decade since the first Carmageddon game came out, and no amount of destruction derbys in between then and now have ever made the gaming community lose its’ appetite for wanton destruction with vehicular violence. Suffice it to say that the next Carmaggedon game, Reincarnation, will certainly not disappoint in terms of delivering all that blood and gore that the series is known for. With the public beta already out, it is easy to see that the developers have managed to surpass many of the more crude aspects of the alpha release.

So Many Choices, So Little Time

While a lot of people may be complaining that the visuals for this game may be a little on the weak side of things (most of the textures are a little flat, and character models tend to look generic), there is no doubt that the developers had been busy working one giving players plenty of content. The Public Beta of the game already features several modes ranging from race (Classic Carma), combat elimination (Car Crusher), stage tag (Checkpoint Stampede), elimination race (Death Race), objective race (Ped Chase), and tag (Fox’n’Hounds).

And those are just the game modes, there are also a ton of stages and cars to choose from –speaking of choosing cars, obtaining new ones is a quite an experience. You will have to defeat and destroy other vehicles in order for you to capture them to add to your garage (some cars are unlocked through other means, but blowing them up first is more fun).

There’s a single player career mode to keep you busy or if you can hook up with friends, there is a multiplayer mode available for both online and LAN. Yes, you heard that right, local area network is supported by this game which means that you do not have to deal with network latency of your friends can bring their rigs over. Continue Reading

Is the logistics of getting people to come over too cumbersome? Just remember that online is also an option –but regardless of how you look at it, this game is worth setting up a LAN party for. Up to 8 players can connect on Car Crusher, Stampede, Death Race, and the tag match – expect the battles to be frantic and fast paced with all the random item pickups and the squish of random NPCs milling about unleashing your inner road rage.

Not having friends to play with is not an excuse; you can still hook up with public lobbies online or, should net access be truly out of the question, play with the AI. Notably, enemy AI in this game provides a pretty decent challenge (as long as the occasional bug does not affect their performance).

This game is certainly a design to appeal to the more adult players – the amount of violence and gore on Carmageddon: Reincarnation is going to make the more squeamish of players lost heart pretty early. Even with the very unrealistic graphics, the amount blood that bursts out of pedestrians can be quite a shock for players who were hoping for something a little less morbid to play. On the other hand, if you just love the hilarious violence (like the kind that Twisted Metal delivers), you will enjoy the gameplay and challenge that this game delivers.

One of the things we loved about the line up of vehicles is that there are tone of really fun ones. Sure there’s your usual suspects: the formula 1 type, the stock racer, the super car; those you already expect to see regardless of what game you are playing. And then there are the cars that will make you laugh and smile. One is a complete and total homage of the DeLorean time machine from Back to the Future –complete with the huge stuff in the back that resembles the car from the film. Another is an obvious spoof of the Nolan-verse Batmobile (basically an angry urban tank). Other cars are just downright silly, like the bulldozer and Volkswagen-Beetle inspired one. And yes, they all look like they’ve been weaponized to be part of some Mad Max style apocalypse.

The graphics on the game may not be the super-textures and polish that most AAA titles are likely to present, but it delivers the visuals just fine (enough for you to appreciate the high speed violence that happens once the game begins). The gameplay on the other hand, is outright magnificent. The pacing is quick, the learning curve is relatively nice (not made for beginners, but even practicing is fun), and the mechanics will keep you coming back for more. Sure the game at its’ current incarnation does need a few tweaks, patches, and plenty of polish. But for the state it is already it, you can already expect to draw out a ton of fun out of it –and at the end of the day, that is what truly matters and that is why Carmageddon Reincarnation is one of most enjoyable car wrecking games we can ever recommend. 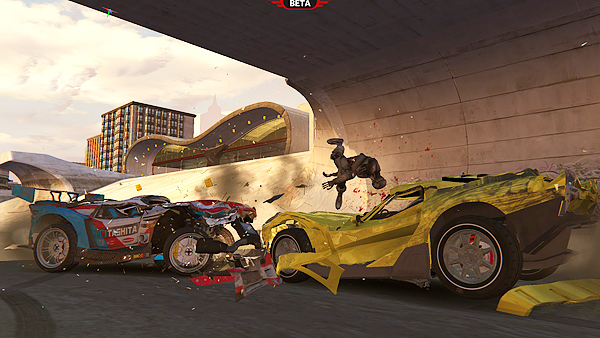